‘Floodtide’ by Heather Rose Jones is a historical fiction story, set in a land where magic and mystery has its place. Told from the point of view of a teenage servant girl, it lets the reader see all echelons of society, and how they deal with an impending flood – and the serious health and societal implications it brings. Roz was dismissed from her previous job as a laundry maid after being reported for indulging in indecent acts with another young woman. What looks like the worst thing that could happen turns out to be the start of a new life, with its share of challenges – but with new friends and a new purpose.

I was transported to another place and time by the author. Heather Rose Jones has a talent for meticulous world-building and her writing shows intelligence and a flair for her craft. The story was beautifully teased out, with secrets we get to know as Roz does. Roz was an interesting character. She knew what she could expect from life but there were some things she was willing to defy expectations for.  And that could get her into a lot of trouble. Liking girls was always going to be a problem – but she wasn’t the only one. The hierarchy of society was integral to this story, and adding that to the idea of charms and mysteries made it a fascinating read. The word that comes to mind when finishing this book is exquisite. I loved it.

I was given this ARC for review.

‘Hiding Hearts’ is a wonderful book, a story that captures the essence of the Civil War immediately. As a huge fan of historical novels  I was delighted to find this novel and this particular author. This is my first R.E. Bradshaw book and it certainly won’t be my last. I loved her writing style and her descriptive powers are excellent. I felt as if I was right there.

Lottie Bratcher, a poor illegitimate farm girl, has taken on so much to try and get her family through what is to come as the Yankees arrive in the area. There is much danger, especially for a young woman, but she is determined. She is also infatuated with Patrice Cole, a rich neighbour,  but has no idea how to deal with it. The romantic element was very touchingly written. For a few hours I could immerse myself in a world long gone, a world of war and bloody battles, of women left behind to pick up the pieces. The characters were realistic and sympathetic and I could feel their pain, their fear. As well as dealing with the collapse of their society, Lottie and Patrice are finding that there are so many secrets they have to keep. R.E. Bradshaw weaves a fantastic story and I adored it. Highly recommended.

You know a book is a winner when you love the characters so much you want their story to go on and on. ‘Cavalcade’ by K’Anne Meinel is one such book. Erin and Molly live together on a farm in the mid 1800s and try desperately to keep up the pretence of being just good friends. As their neighbours try to pair them off with eligible men they know they have to move somewhere no-one knows them. Erin’s appearance leads to strangers mistaking her for a man so taking on that role and leaving for a new life in Oregon with Molly seems to be the answer.

The story is beautifully told and the vivid descriptions of life for those heading west were truly fascinating. I worried that their secret would be revealed but also about the dangers and hardships. I felt as if I was there with them and became so invested. Now I can’t wait to read the next book in the series ‘Pioneering’!

I was given this ARC for review. 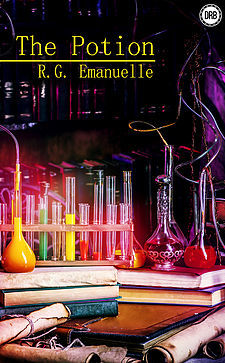 R.G. Emanuelle had my rapt attention from the start with this Victorian mystery romance. Vera Kennedy and Georgette Harris are widows whose scientist husbands appear to have been carrying  out some unorthodox experimentation. As the women become more involved in finding out exactly what they had been doing and why, their attraction to each other grows. But secrets, pride and trust issues conspire to keep them tantalisingly so near yet so far.

The writing was so wonderfully descriptive and had me right there, in the dark, gloomy, damp and sinister world of Victorian Boston. The oppressive  nature of life for women of all classes came through so strongly and I wanted Vera and Georgette to take control and overcome the restrictions on them. The mystery behind their late husbands’ scientific work had me on the edge of my seat. The peril the women were in and the shady characters around them had the hairs on the back of my neck standing to attention.

But it was the interaction between Georgette and Vera that truly made this story. Although the attraction between them was obvious neither felt able to act on it right away. It was the development of their feelings and the erotically charged nature of their meetings that kept me wanting more and more. An excellent novel with characters I hope to encounter again. 5 Stars

‘The Northwoods’ by Jane Hoppen is set in 1850s Wisconsin when most women were entirely dependant on husbands and fathers. When that is no longer possible for Evelyn due to the death of her husband she decides to disguise herself as a man and go to a logging camp for the winter, in order to help her family survive . She meets Sarah Bell, a woman seemingly at the mercy of her dead lover’s brother. Evelyn must keep her real identity secret at all costs, while Sarah lives in fear of being assaulted by any of the rough loggers in the camp. Their friendship is of necessity but they see something in each other that drew them together.

The story was about women doing what they had to in a harsh world. They discovered things about themselves that they did not realise they wanted or needed. I was on the edge of my seat at many points in the book as they were in danger and taking many risks. Evelyn and Sarah’s relationship was slow and sweet and tender. I wanted them to have a future together and not be forced into the roles people expected of them. I loved the historical aspect of the book and felt it was well imagined and well written. I could almost smell the appalling odours of the camp, so good was the writing. A very enjoyable book with characters I wouldn’t mind finding out more about. 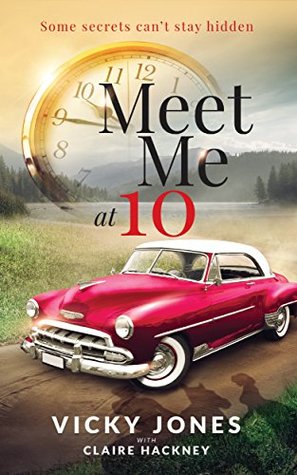 I was really impressed by the writing and storytelling in this debut novel. Vicky Jones and Clare Hackney deal with some difficult subjects in Alabama in the 50s and it is not an easy book to read but it is worth it. The racism is appalling and some of the characters absolutely detestable. The level of hatred towards the black community was horrendous and I found it hard to stomach. But there were some good people too, those who were willing to stand up for what was right.  Shona was a young woman with a past she tried to keep to herself. She was kind and strong and different from other women around her. Her growing feelings for Chloe, daughter of the boss, appealed to me and I enjoyed reading their interactions . 5 Stars.

I was given this ARC by the author in return for an honest review. 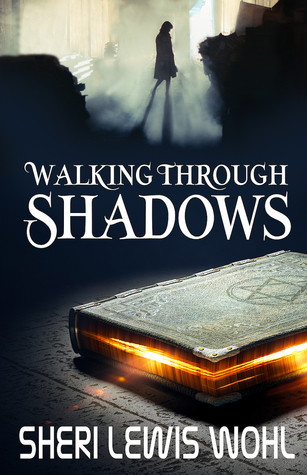 Molly Williams is a witch with a destiny. She’s been resisting it her whole life but when she unexpectedly finds herself back in the 1800s in the company of a beautiful Native American woman she can’t deny it any longer. Along with her friends Winnie and Angus she is transported back to a time when her powers are needed. She has the fight of her life against the witch- finder and his plans to destroy her.

This was an enjoyable story of finding love and purpose when you least expect it. I liked Aquene a lot as she was written as such an open and caring character. The descriptions of the unspoilt West were lovely and I could sympathise with Aquene as to what her people were about to lose. The author managed to convey a sense of fear and menace as the group fought to stay one step ahead of the true evil, which was not witchcraft, but the witchfinder himself.

I was given this ARC by Netgalley and Bold Strokes Books in return for an honest review. 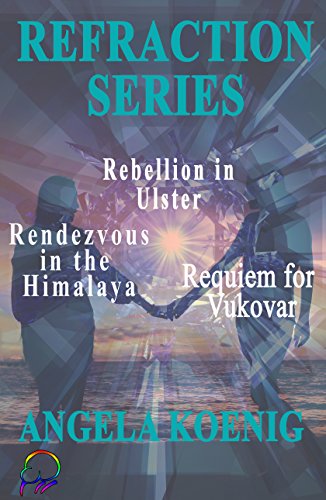 This trilogy is utterly brilliant!  Angela Koenig has written a gripping series of novels following Jeri O’Donnell from the troubles in Ulster, to the Himalayas and onto Yugoslavia when the Balkan war was in full force.  Her life is one of violence, tragedy and keeping hidden from those out to capture her.  When she meets Kelly Corcoran, an American tourist seeking peace, she finds a love that changes her.  Their connection was intense, beautiful and at times frantic and joyful.  Can they survive the dangerous life they lead? Is love enough?

The writing was intelligent and poetic and managed to convey a sense of history that pulled me into the story and made me feel as if I was right in the midst of it all.  Jeri is a very complex character and her journey is one that I am so glad I followed.  The love story woven throughout is deep and vital and one I won’t forget.  I highly recommend this trilogy and wish I could give it more than 5 Stars.

I was given this ARC by Affinity Rainbow Publications in return for an honest review.

I’ve just downloaded this great freebie from some fantastic lesfic authors. I can’t wait to get reading!

Pirates. Basketball players. Faeries. What do they all share in common?

Ten authors of lesbian fiction bring you a “sample platter” of their work for free. Contained within Finger Food, you’ll find historical romances, contemporary romances, fantasy, mystery, and more. The stories and novel excerpts included within this collection are each as different as the authors who wrote them. The only thing they have in common is that they each star lesbian protagonists.

Download now and enjoy this collection of lesfic appetizers! 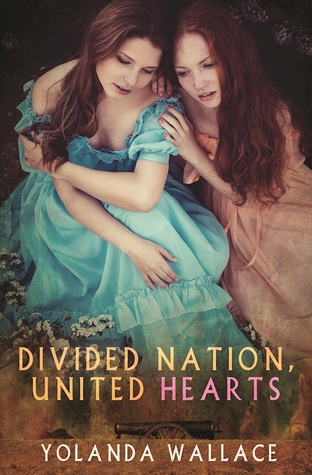 This is one of those stories that made me run through a mixture of emotions. It was at times sad and tense but at other times joyful, beautiful and romantic. I found myself totally immersed in the story of Wil Fredericks, a woman who runs away to join the Union army disguised as a man and meets the woman of her dreams. Clara is a southerner but that is just one of the enormous obstacles in their way. Yolanda Wallace has managed to write a wonderful love story set against the worst of times. I loved it and highly recommend this book. Five stars!

I was given this ARC by Netgalley and Bold Strokes Books in return for an honest review.